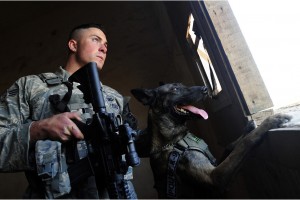 American troops in Afghanistan and Iraq have been taking assistance from military personal protection dogs for several years. These trained dogs perform crucial tasks like bomb detection with their handlers. They also undergo intense training before they are put on-duty.

Guarding the Man-Kind Since Early Times

Dogs have worked alongside armed forces on battlefields for centuries. They helped protect soldiers during wars by performing duties of sniffing the ground to detect bombs and IEDs. Our canine companions have been servicing mankind since time immemorial, and in the ancient Egyptian era, they were used as message carriers. Some civilizations like the Corinthians were the first ones to use dogs for guarding purpose. The Romans also used guard dogs as alarms for their troops.

Canine Companions as Part of the U.S. Forces

Dogs have been a part of battlefields for centuries, but it wasn’t until WWII that these canines got recognition for their efforts and role in the military. During WWI, Stubby, Private Jr. Robert Conway’s dog, performed heroic acts when it detected enemy gas and sent out warnings by barking out loud. Stubby also played a major role in locating wounded soldiers on the battlefield.

Another dog named Union Jack saved many lives when it ran towards a spray shells being fired by the enemy troops during the Civil War. There are many more military dogs that have showed utter bravery in helping troops and citizens remain safe.

Even though many family protection dogs and military dogs have proved their skills continually over the years, there is still a lot that needs to be done to recognize their true value. When trained, these dogs can serve the role of IED detectors and much more. There are many examples of heroic acts of dogs during wars, yet the U.S. fails to maintain a proper training system that keeps canines involved in the military.

Exceptional Senses that make Dogs a Perfect Fit for Military

Dogs have exceptional sensory powers, much stronger than that of humans. Unlike humans, dogs can hear sounds coming from several miles. Their sight is also thousand times better than ours. What makes them extremely useful for military is their ability to see in the dark. They also have a wider vision, which means that they have a broader vision-area.

And that’s not all that our adorable canine companions are good at. They bite with a pressure of 400 pounds/sq inch. They have very strong jaws that can bring down any intruder or enemy in seconds. The pressure of their bite is not very less than that of a lion or a shark.

The Major Highlight – They Can Sniff Out IEDs

The most important quality that allows canines to become military and police dogs is their sense of smell. The canine nose has 220 million scent receptors with humans standing at 5 million only. This means that protections dogs can serve as efficient IEDs detectors in the U.S. military.

Instead of getting more trained dogs for this crucial task, the Defense Advanced Research Projects Agency spent almost $43.4 million to design a bomb detection device with chemical sensors. However, the device did not work well enough and was still incomparable to the scent detecting power of a canine.

Dogs not only have impressive sniffing skills to detect bombs, but they also offer companionship to soldiers placed in regions ravaged by war. They are friendly, loving, caring, possessive, and get close to their handlers so much so that they guard them on battlefields. By training more canines to become a part of the military, the troops will be able to benefit from their amazing sensory skills that can save many lives.