es just melt your heart? Well, did you know that the puppy stare that you get from your

Well, did you know that the puppy stare that you get from your family protection dog is actually making the bond between you and your furry friend stronger. A new study published by Journal Science suggests that both you and your dog experience a release of oxytocin also known as the “Love Hormone”.

What Happens When Your Family Protection Dog Stares At You

This study explores what really happens when your trained protection dog gives you a “puppy stare”. In the study, oxytocin levels were measured before and after the dog owners spent 30 minutes with their pets. This included quality time petting them, talking to them, and gazing into their eyes. Afterward, increased levels of oxytocin were found in both the owners and their dogs. Another interesting find is that the more the oxytocin levels rose in humans, the more it also increased in their dogs.

Another separate experiment found that female dogs stared longer at their owners after spending quality time with them. In this study, both the dogs and humans had increased levels of oxytocin, too. 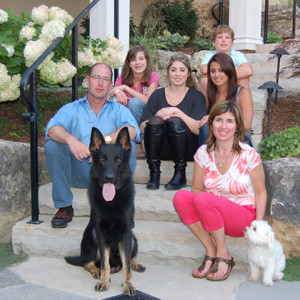 In animals, the key role of oxytocin in mammals is to fuel the bond of the parent with its infant. For instance, a pup emits ultrasonic noises when separated from its mom. This causes a release of oxytocin in the mom dog, which causes her to nurture her pup. While the mother is nurturing her puppy, more oxytocin is then released and increases the attachment between the both of them.

If you look at the same situation in humans, oxytocin levels increase when a mom breastfeeds her baby. During this time, hours can be spent gazing into each other’s eyes. This increases the oxytocin levels more and further fuels the attachment and love between mommy and baby.

This further justifies how you are able to co-exist with your personal protection dog and why your puppy’s eyes just make you love them more. After all, it is rightly said that a dog is a man’s best friend and this justifies how it becomes possible.