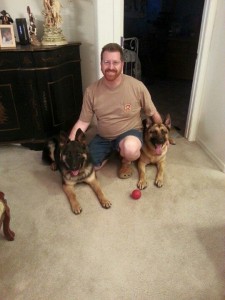 “Thank you for what you do! Because of how you train your dogs, they are helping people to lead normal lives in an uncertain world. You have been a blessing to our family in ways we could never thank you enough for over these last 10+ years. Thank you is so inadequate for what you have done for so many!”

One of the best parts about being in the protection dog training business is hearing from our clients about their experiences with our dogs. Every CC Protection Dog spends months undergoing dog training, so we consider each of them a part of our own family and love to find out how they are doing once they have become a part of yours.

Protective Dogs for the Family

Mr. and Mrs. Hubbell have been friends of CC Protection Dogs for over 10 years. When they first came to us looking for a personal protection dog, we matched them with Rocky. Their biggest fear taking him home was that they would ruin his dog training. However, we assured them that it our dog training techniques had developed into his natural instinct. Sure enough, Rocky quickly bonded with his new owners and carried out his commands flawlessly. Even when the Hubbell’s could not remember the verbal command, he would obey automatically because they became “his”.

Mr. and Mrs. Hubbell soon welcomed another protection dog, Bracken, into their family. Since Rocky was doing extremely well with his commands, we advised them to use him to train Bracken. Since following our recommendation, Bracken has become their “permanent shadow” with a protective yet friendly personality. When Mrs. Hubbell lets anyone into the home, he stands alertly between her and the guest until she commands him otherwise.

It wasn’t long until Mr. and Mrs. Hubbell decided to purchase a 3rd family protection dog – a beautiful German Shepherd named Karma. During our dog protection training, we noticed that although she knew her commands extremely well, it took her slightly more time to respond. However, what the Hubbell’s eventually realized is that Karma simply responds better to softer commands – the softer the command, the quicker the response. They also found that Karma’s easy-going personality made her perfect for another job – working as a therapy dog. In addition to keeping her family safe, Karma is a registered therapy dog and works at the behavioral health hospital where Mr. Hubbell is employed. Her job is to meet with small groups of people in various stages of mental distress. Each Monday, she makes her rounds and allows the patients to pet her and even sits in their laps. The hospital staff and patients have been extremely impressed by her affectionate and well-mannered behavior.

Karma, Bracken, and Rocky all get along very well and can play for hours on end. Similar to the relationship between Rocky and Bracken, Bracken has helped teach Karma valuable behavior. They are gentle with the entire family, and are especially attentive and alert to Mr. Hubbell’s mother who is disabled.

A Gift of Protection

The Hubbell’s are so happy with their family protection dogs that they decided to purchase one as a gift for their nephew, an army veteran. Because of his PTSD, he felt vulnerable and could not enjoy even his favorite things. Things changed dramatically for him since the Hubbell’s introduced him to Corry. He now goes backpacking in the mountains and enjoys all of the activities he loves with Corry by his side. Corry gets along great with his entire family, including their 3-year-old daughter. Although his PTSD previously made him worry that he was unable to protect his family, he now feels at ease knowing that his family is protected.

Mr. and Mrs. Hubbell are tremendously satisfied with CC Protection Dogs, and we are grateful for the opportunity to serve them and their families. Read more client stories and testimonials here.