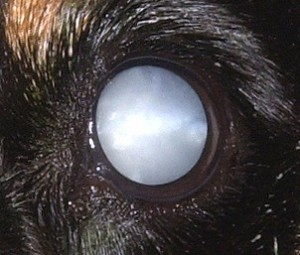 Cataract is a disorder of the eyes which affects many dogs. Dogs suffering from this disease have an eye that looks like a disk filled with fluid. A normal dog’s lenses are clear, whereas dogs with cataracts have a fluid inside their lens that is clearly visible. Let’s learn more about cataracts in German Shepherd protection dogs.

Cataracts are one of the most common eye-problem that dogs have. This disease affects the lens of a dog’s eye, which may or may not disrupt its vision. When a dog’s lens is cloudy, it prevents the light from entering into the retina. Because a dog doesn’t need to read or write like humans, it isn’t severely troubled by this disease.

What Causes Cataracts in Guard Dogs?

This eye disorder can be caused by a variety of factors . In most protection dog breeds, it is due to a gene formation that is inherited or old age. Sometimes cataracts are present in dogs at the time of birth, but due to their small size, they are not visible. Once the dog grows up, these cataracts become larger and more visible.

Another cause of cataracts is illness. If your personal protection dog falls ill or has diabetes, may develop cataracts that could vanish over time.

In German Shepherd protection dogs in particular, cataracts are said to develop due to a recessive gene. Cataracts might also develop due to certain environmental factors including trauma, exposure to toxins, inflammation, and metabolic problems. Orphan pups that are given milk replacers also develop cataracts due to the deficiency of arginine amino acid.

The three different types of cataracts are known as congenital cataracts and juvenile cataracts. Let’s learn about them below:

• Juvenile or developmental cataracts do not develop until the dog is six years old. This means that these types of cataracts develop with time and are not inherited.

• Senile cataracts develop in dogs above six years of age.

German Shepherds suffer primarily from congenital cataracts which are inherited from the parents, both of which get worse with time. 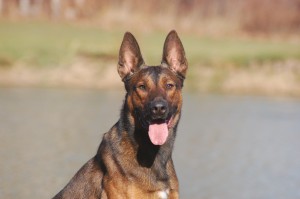 The vet might also suggest some blood tests to find the underlying cause of the disorder which will help with the treatment process. If cataracts are not inherited and occurred due to a disease or other external factors, it can be treated by removing the cause. Sometimes vets give eye drops to help relieve the symptoms of cataracts, if any.

Cataracts can also be removed by surgical procedures performed by an ophthalmologist. This procedure requires the vet ophthalmologist to remove the lens and replace it with a plastic or acrylic prosthetic lens. This surgical procedure is quite complicated, but has a 95% success rate. If your protection dog will require surgery, it’s important to properly prepare both yourself and your dog.

The best way to ensure that your family protection dogs are protected from this disorder is to keep a close eye on their health and eye condition. If suspicion arises, head to the vet for a physical exam.