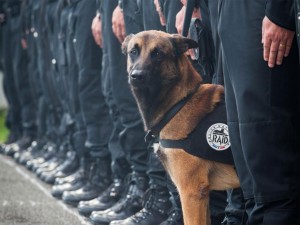 Protection dogs have been playing a major role in police forces all around the world. A recent example of these protection dogs’ heroism was Diesel, a 7-year-old Belgian Malinois police dog who was the only one to die in the French police’s encounter with the terrorists who were responsible for the deadly Paris attack.

Diesel was part of the police team that was raiding an apartment when one of the terrorists blew themselves up along. Sadly, Diesel was in the apartment and died due to the impact of explosives. Diesel’s death received global appreciation, and soon the Belgian Malinois protection dog became the hero of social media with a huge number of people tweeting its name.

Protection Dogs in the United States

It is quite clear that police forces all around the world are training more protection dogs to serve in the line of duty, but the exact number of these dogs in the United States is not available online at the moment. However, the director of the North American Police Work Dog Association, Jim Watson, gave a vague figure; 5,000 dogs, and that was in 2010.

These guard dogs are trained and sent to different domestic law enforcement agencies to help with the detection of drugs and bombs. These dogs also help chasing down criminals. They work with deadly stuff, which is the reason that an increasing number of dogs die in the line of duty.

Police Protection Dog Fatalities in the Line of Duty

The Officer Down Memorial Page tracks police fatalities including guard dogs that are members of the force. The number of dogs that died in the line of duty as shown on the page for the year 2015 is so far 26. This is the highest number of police dog deaths in the past couple of years.

Many of these dogs did not just die in the line of duty, but some of them suffered heat stroke by staying inside the squad car on a hot day. This year alone, eleven dogs died from heat exhaustion. There are numerous cases where police dogs were left to die in a hot car including two dogs with the Baltimore City Detention Center and two dogs in Florida.

This clearly points out that an increasing number of protection dogs die because of heat exhaustion than in the line of duty.

With the staggering number of canine deaths caused by heat strokes, the K9 unit vehicles are now fitted with advanced electronic systems that automatically regulate heat and humidity. These systems also have the ability to alert the officers in case the air conditioning system stops working.

A great way to decrease the number of police dogs is to implement new laws in different states. The police department should also be responsible to take care of these canine members of the squad to ensure that they do not lose their lives due to circumstances that can easily be controlled.

Canines are not only great companions, but they can also be great guards. The heroism with which many of these dogs have made several criminal and terrorists activities unsuccessful is commendable.