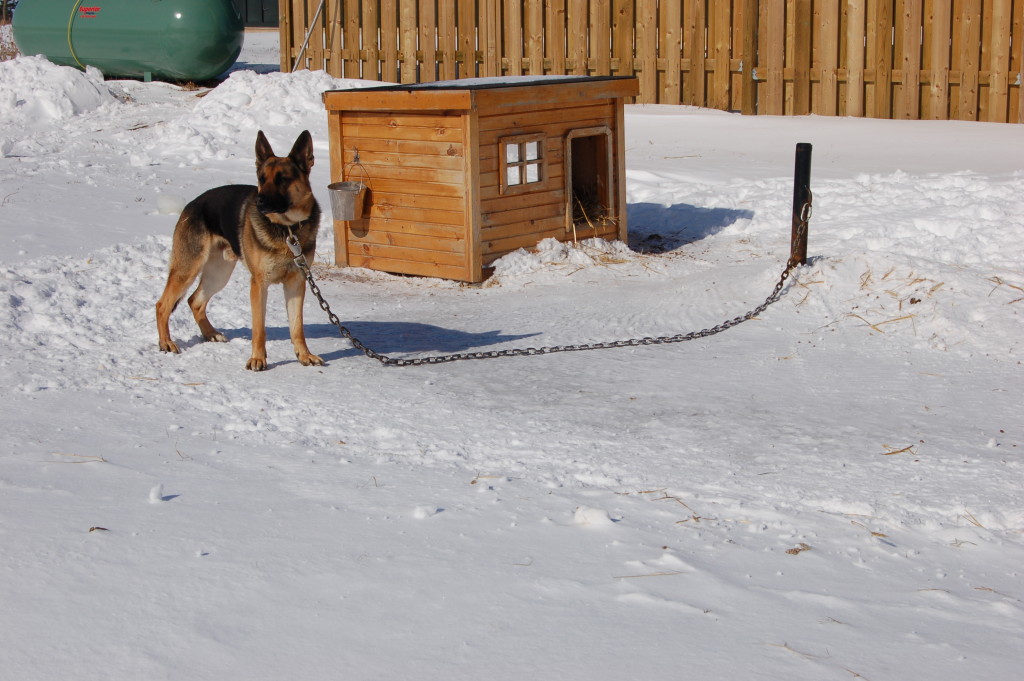 There has been a great discussion on the use of kennel and chains, and many dog owners are unable to make the right choice. Many owners are under the impression that dogs can be better handled if enclosed in a kennel. They believe that a kennel is safer and restricts the dog from running away or from making their home a mess. However, if we look at it from the dog’s perspective, we would understand that caging dogs in kennels is cruel and has no effect in keeping the dog from misbehaving.
So, what do you think is better for your dog? Do you think your dog feels more comfortable in an enclosed space or an open one? Let’s find out what is better for your dog.

There are a lot number of people who prefer to put their dogs in kennels. The main reason behind this preference is that kennels are more spacious. Therefore, dog owners believe that their dogs will have enough room to move around, relax, and play. However, the thing that they fail to realize is that kennels make dogs uncomfortable and aggressive.
When you lock up a dog in a kennel, you make it feel insecure and alert. The dog feels that it is in trouble or forced to live in a small space. This feeling makes the dog hyper and aggressive, and the dog tries to find ways to escape. Just put this scenario on yourself and imagine you being locked up inside a small room. So, would you sit and relax or would you try to find ways to escape?

Kennel interferes with a Dog’s Needs

Dogs are social animals and they love to make friends, run around the house freely. Therefore, confining them into small cages is never an ideal scenario. Moreover, they have physical needs that get disturbed when they are caged in kennels. Dogs also need mental stimulation and lots of exercise, which it doesn’t get due to being caged in a kennel.
There are many dog breeds that are calm by nature and do really well in a kennel. However, it is morally wrong to confine dogs in small spaces that deprive them of their most basic mental and physical requirements. Although it might seem like a good idea to put your misbehaving dog in a kennel, but the consequences to that may be detrimental.
Dogs are not made for kennels. They are extremely social and affectionate. They also love to move around in the house freely, which is impossible when put in a kennel. Another disadvantage of putting your dog in a kennel is that it will try everything to break free from it. The dog might scratch, bite, dig, and chew the kennel to escape, which is a red sign that tells you that the dog is losing its mind.

Seeing your dogs in chains might be the most horrible sight, but in all honesty, it is far better than putting the dog in a kennel. Many dog owners do not like to chain their dogs because they believe that it is cruel. Instead, they put them in kennels so that they get enough space to play. As appropriate it might sound, there are many reasons to not to put your dog in a kennel. So, why are chains better and doesn’t make the dog feel suffocated in them?
Many might say that chaining dogs is inhumane and cruel. However, if you compare and contrast a chain to a kennel, you will come to a realization that chains are better than kennels. Chains are better as they do not restrict the dog’s actions and movements. They provide more freedom and room to the dog to run, jump, and play. Moreover, chains keep the dogs in control and are used to keep the dog in its limits.
However, there are certain rules that dog owners need to follow in order to keep the dog calm and comfortable in a chain. The chain that you choose for your dog should be of proper length. The dog should be able to move freely without getting hurt. The material of the collar also holds a lot of importance as a bad material will suffocate or hurt the dog. The preferred collar material for a dog is leather or nylon. When putting your dog on a chain, make sure it is not wearing a choker collar. Chokers are tight on the neck of the dog and if the dog tries to struggle or run with a chain attached to a choker, it might injure its neck or choke itself. Therefore, to avoid any disastrous situation, make sure you never pair the choker with a chain.

Dogs in an Open Yard

There might be some dog owners who would try to find a third option of open yard. Of course it sounds right to have your protection dogs in your open yard, but it has its own pitfalls that you must be aware of. If you want to provide freedom to your dog by the yard fence or in an open space, you will drive it crazy. Dogs won’t do really well with that much freedom and will try to escape through the fence.
The open environment is like a freedom call for the dog and it will exhaust itself by trying to break free. Therefore, if you think that going with this option is better than kennel and chains, you need to reconsider.

Max von Stephanitz was a German dog breeder who did not believe in dog kennels. He criticized the organizations and people who promoted the concept of kennels without knowing the effect that they have on dogs. He also attacked humane societies and kennel clubs in his criticism by saying that the name ‘kennel clubs’ itself should be an eye-opener for the people that want to associate with them.
The reason that he did not support kennels was that they deprive dogs of their basic necessities. Although kennels are used to manage dogs and control their behavior, they have nothing to do with any of it. A Protection Dog in a kennel is helpless, scared, and defensive. Putting such affectionate animals in kennels is injustice to them. Therefore, if you want to leave your dog at home or in an open space, go for chains instead of kennels.